Back to news index
← Previous Next →
The World’s Oceans Are in Danger, Major Climate Change Report Warns

WASHINGTON — Climate change is heating the oceans and altering their chemistry so dramatically that it is threatening seafood supplies, fueling cyclones and floods and posing profound risks to the hundreds of millions of people living along the coasts, according to a sweeping United Nations report issued Wednesday.

The report concludes that the world’s oceans and ice sheets are under such severe stress that the fallout could prove difficult for humans to contain without steep reductions in greenhouse gas emissions. Fish populations are already declining in many regions as warming waters throw marine ecosystems into disarray, according to the report by the Intergovernmental Panel on Climate Change, a group of scientists convened by the United Nations to guide world leaders in policymaking.

“The oceans are sending us so many warning signals that we need to get emissions under control,” said Hans-Otto Pörtner, a marine biologist at the Alfred Wegener Institute in Germany and a lead author of the report. “Ecosystems are changing, food webs are changing, fish stocks are changing, and this turmoil is affecting humans.”

What on Earth Is Going On?

Sign up for our weekly newsletter to get our latest stories and insights about climate change — along with answers to your questions and tips on how to help.

For decades, the oceans have served as a crucial buffer against global warming, soaking up roughly a quarter of the carbon dioxide that humans emit from power plants, factories and cars, and absorbing more than 90 percent of the excess heat trapped on Earth by carbon dioxide and other greenhouse gases. Without that protection, the land would be heating much more rapidly.

But the oceans themselves are becoming hotter, more acidic and less oxygen-rich as a result, according to the report. If humans keep pumping greenhouse gases into the atmosphere at an increasing rate,marine ecosystems already facing threats from seaborne plastic waste, unsustainable fishing practices and other man-made stresses will be further strained.

“We are an ocean world, run and regulated by a single ocean, and we are pushing that life support system to its very limits through heating, deoxygenation and acidification,” said Dan Laffoley of the International Union for Conservation of Nature, a leading environmental group that tracks the status of plant and animal species, in response to the report.

The report, which was written by more than 100 international experts and is based on more than 7,000 studies, represents the most extensive look to date at the effects of climate change on oceans, ice sheets, mountain snowpack and permafrost. 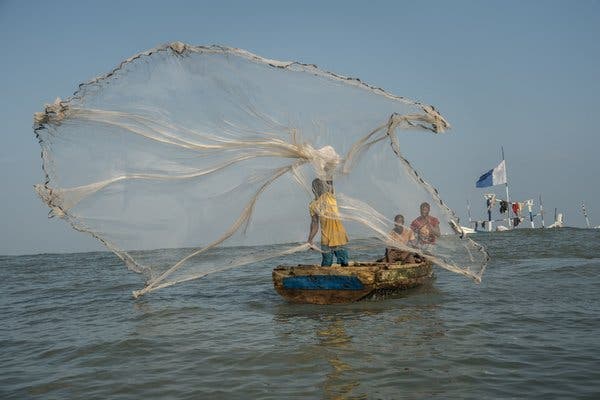