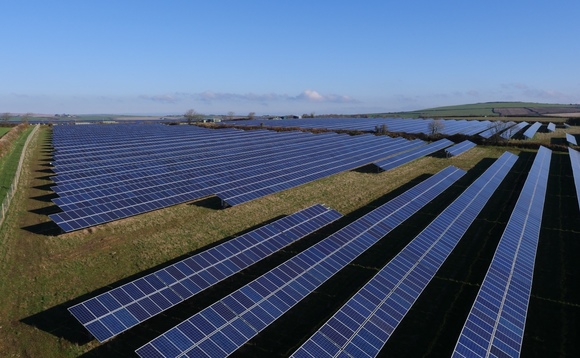 Cool, sunny weather and low air pollution levels spurred by the coronavirus lockdown have helped drive a new all-time solar power record in the UK, with solar farms generating a peak of 9.69GW of electricity for the grid on Monday afternoon.

The feat was recorded by the University of Sheffield’s live UK solar power generation tracker at 12.30pm on Monday, surpassing the previous record achieved in May 2019 of 9.55GW, and is thought to have been in part prompted by clearer, less polluted skies.

The UK is currently experiencing significantly lower levels of air pollution due to far fewer cars on the roads or polluting industrial activities taking place amid restrictions aimed at curbing spread of Covid-19, which has resulted in clearer weather conditions.

That, combined with relatively cool temperatures and sunny weather, provides optimal conditions for maximising solar PV efficiency, according to the Solar Trade Association (STA), which said it expected more solar generation records to be broken in the coming weeks and months.

It means that, at the time of the peak on Monday, UK solar PV generators were meeting almost 30 per cent of the UK’s overall electricity demand, according to STA chief executive Chris Hewett.

“Ideal weather conditions and lower levels of pollution than normal mean solar is providing record levels of cheap, clean power to the grid,” said Hewett. “At a time when most of us are working remotely, we can say that solar is truly keeping the WiFi on.”

A decline in economic activity and many Britons working from home has seen a dramatic drop in demand for electricity, which together with an abundance of solar and wind power on the grid has helped contribute to the lengthiest period without coal power in the UK so far in 2020, which currently stands at more than 11 days and counting.

It follows news earlier this month that renewable power contributed a record 44.6 per cent of the UK’s electricity during the first quarter of the year

Dr Nina Skorupska, chief executive of trade body the REA, said renewables had “once again raised the bar” with the new solar record recorded this week.

“This is an astonishing feat and indicates only the beginning of what the industry is capable of,” she said. “However, for this to continue into the future, the renewables and clean technologies industry needs assurance that in this trying time the fight against climate change remains a top priority for the government.”