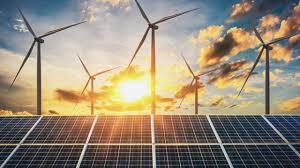 “There is hardly a cloud over Germany,” Andreas Friedrich, a spokesman for the DWD, said by phone. “And a high-pressure system over Scandinavia will keep these conditions in place until at least Friday.”

Renewables are cutting deeper into the market share for coal, the fuel on which Germany’s wealth and industrial prowess was built. The government forecasts that green power will make up about 80% of the electricity mix by 2038, compared with just over 40% in 2019.

The government has agreed with coal plant operators led by RWE AG and LEAG to gradually wind down power plants fed by the fuel by 2038. Some of those facilities may close earlier than expected as falling costs for solar energy and firm prices for carbon pollution allowances makes coal power increasingly unprofitable.

Sunny conditions meant solar generated as much as about 40% of Germany’s power Monday, compared to the 22% produced by coal and nuclear, according to Agora Energiewende. Solar, wind and other renewables accounted for 78% of Germany’s electricity output.

“Every year there’s more installed solar, so the record gets broken nearly every spring,” BloombergNEF analyst Jenny Chase said of the rise of solar power, adding that fewer flights and lower air pollution due to the coronavirus lockdowns may have lifted the share supply coming from solar.

Coronavirus lockdowns are accelerating market trends that spell doom for the dirtiest fossil fuel. Less activity has slashed electricity demand just as spring’s sunnier and windy weather boosts output from renewables, which have priority over fossil fuels in feeding into the grid.

That’s resulted in more hours when electricity prices turn negative, where consumers essentially are paid to take excess power off the grid. The phenomena is usually seen when holidays or weekends coincide with exceptionally sunny or windy weather. Incidents of negative prices are increasing, with 773 negative prices recorded for 15-minute contracts in the first three months of the year, a 78% increase from the same period a year ago, according to Epex Spot exchange data

Green sources of power like solar and wind are used to meet electricity demand ahead of more costly production such as coal and lignite. With prices more regularly negative, fossil fuels aren’t getting a look in.