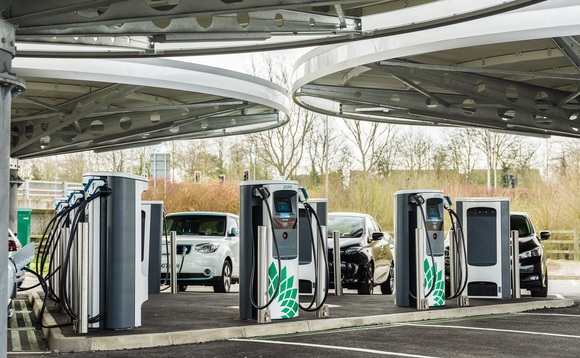 Back to news index
← Previous Next →
Government plots 2,500 rapid EV chargers across England by 2030

The government has unveiled its vision for a major rollout of high-powered, rapid-chargers for electric vehicles over the next 15 years, confirming a goal to deliver a network of 2,500 raid charge points across England’s motorways and A-roads by 2030 to meet growing demand ahead of its proposed ban on fossil fuel car sales.

Setting out details yesterday for its Rapid Charging Fund – part of a broader £500m EV charging commitment in the recent Budget – the Department for Transport (DfT) said its aim was to “ensure there is a rapid-charging network ready to meet long-term consumer demand for EV chargepoints ahead of need”.

England at present has more than 800 open-access 50kW EV chargers on motorways and A-roads, with an average of two at each motorway service station, meaning drivers are no more than 25 miles away from being able to charge up their electric cars.

But as demand for EVs accelerates, the government is aiming to increase EV infrastructure further in order to meet demand, targeting at least six high powered, open-access rapid charge points at motorway service stations by 2023, with as many as 10 to 12 at some larger stations, it said yesterday.

These 150-350kW-capable rapid chargers will be able to power up an EV three times faster than most chargepoints currently in place, it explained, delivering 120-145 miles of driving range for a typical battery powered car in just 15 minutes.

Then, by 2030, it expects to have built an “extensive” rapid charging network across England, targeting at least 2,500 points by 2030, rising to around 6,000 by 2035, by which time the government has said it wants to end sales of new petrol and diesel cars.

In order to support the rollout, funding will be available to cover a portion of costs at strategic sites across England’s road network where upgrading connections to meet future demand for high-powered charge points “is prohibitively expensive and uncommercial”, the government said. Further details on how the funding will be delivered are expected to be confirmed “in due course”.

Energy network firms, renewable power providers, and EV charging operators welcomed the announcement. Dr Nina Skorupska, chief executive of the REA, said the inclusion of specific targets for the EV charging network were an encouraging sign of commitment from the government.

“This is an important moment for the UK’s electric vehicle sector, one which should give confidence to investors, fleets, and individual drivers alike,” she said. “Rapid charging is a crucial part of the overall network that the industry is building, and complements the slower chargers currently being installed en-mass on-street, in businesses, and in homes across the country. Ensuring consumer choice in where, how, and with whom drivers charge is a key part of this major technology change.”

In addition, Randolph Brazier, head of innovation and development at the Energy Networks Association (ENA), said the trade body’s members were already “working with motorway service areas to come up with whole system to solutions that work for customers”.

In related news, while the government is consulting on plans to phase out fossil fuel car sales by 2035 or sooner if feasible, there are signs the current Covid-19 lockdown could potentially accelerate the shift away from private car use in some areas.

The government’s instruction that people who cannot work from home should return to work and avoid public transport if at all possible has fuelled fears of a spike in car use.

But it emerged yesterday that a number of local authorities are now considering significant crackdowns on traffic in urban centres. The City of London Corporation is planning to ban cars on the busiest roads of the capital’s financial district as the coronavirus lockdown is eased in order to provide more space for workers to keep a good distance from each other. And, if the plans are successful in keeping traffic down, the authority is to consider making the road closures permanent in order to improve air quality, documents seen by the Financial Times suggest.

Similar plans are being drawn up in York, which could result in it becoming the country’s first zero emission city centre after the lockdown is lifted, with the council seeking government support for a project to restrict access to EVs and bikes, The Times reported yesterday.

The latest developments follow the launch of Octopus Energy Group’s new roaming EV charging service, in a bid to streamline and simplify how battery car drivers pay for their car charging at home, on the street, or on the highway.

Dubbed the Electric Juice Network, the service enables EV drivers to pay with their Octopus account across multiple partner charging networks with all costs appearing on a single bill, enabling drivers to effectively roam across different EV networks with relative ease.

“Electric vehicle drivers have rightly long-complained that public charge points can be a real hassle, and it’s hard to keep track of costs, as every network runs on a unique app or card basis,” said Greg Jackson, CEO and Founder of Octopus Energy. “Octopus’s Electric Juice Network doesn’t just consolidate charging costs, it adds them to your Octopus Energy bill if you’re an existing customer. For non-Octopus customers, you can still use the service to ensure you’re able to track – and pay – in one simple way.”