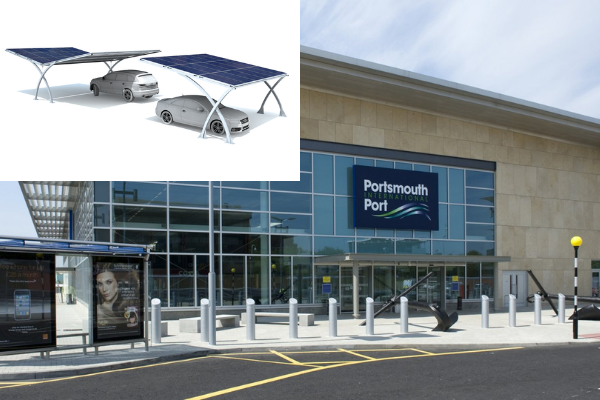 The system will incorporate roof-mounted solar panels across several buildings, as well as a large battery and solar canopies. Overall, the 750kW peak system will include 1,670 solar panels, capable of contributing 30% of the sites power.

It will be the first UK port to have solar canopies and a megawatt sized battery installed as part of a renewable installation according to Portsmouth City Council’s energy services team.

The 1MWh battery will capture power that would otherwise be exported, and will work in tandem with an upcoming battery pilot at the port. ThePort Energy Systems Optimisation (PESO) project was announced in June, and will include the design and construction of a dual chemistry battery which will be a lithium-ion and lead acid hybrid.

When completed the PESO project – along with the Custom Solar battery installation – will provide balancing services to National Grid ESO as well as storing power during lower price periods. Together the systems will be able to provide 98% of the port’s power demand.

Dave Ashmore, Portsmouth City Council’s cabinet member of environment and climate change, said the upcoming project is “another brilliant example of the fantastic work the council is doing to reduce Portsmouth’s carbon emissions, in line with our commitment to reduce carbon emissions to net zero by 2030″.

Gary Sucharewycz, Custom Solar’s development director, said the company was “very proud” to have been selected for the installation.

“This will be a major flagship project in the industry and will be developed and designed to maximise the opportunity for reducing emissions and energy from the grid, utilising solar and large-scale battery storage.

“The project will also showcase the ability to deploy rooftop solar and a major solar canopy solution in a busy operational environment, with a strategy being developed alongside Portsmouth City Council for maximising the generated power and storage solution”.